June 4, 2012 By James Comments are Off Canada, United States

Remember when websites like Wikipedia and several others went dark all day on Jan. 18, 2012 to protest the U.S. government’s proposed PIPA and SOPA and legislation? Well, something like that is happening again; only this time, websites – though not Wikipedia – have decided to “go dark” all day today, Jun. 4, 2012, in protest of the Canadian government’s decision to push through Bill C-38. 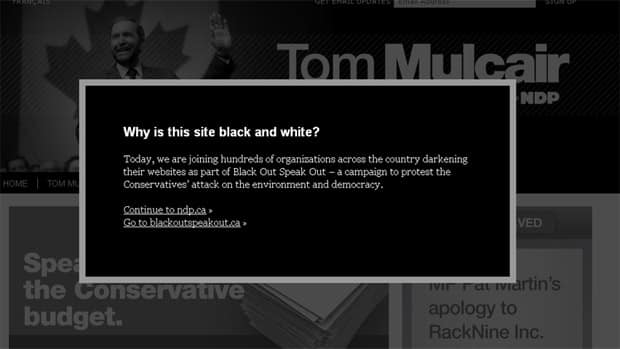 The movement, which is known as “Black Out Speak Out” has garnered the attention and support of Greenpeace and the David Suzuki Foundation, which have the message posted in English and French, the World Wildlife Fund and Margaret Atwood, among others. Some websites, like Atwood’s, have gone completely black with only the Black Out Speak Out protest message appearing. Others, such as the World Wildlife Fund, have a black box that obscures a site visitor’s view of the website. The box also contains the Black Out Speak Out message, but it can be closed, and visitors can view the site normally.

What has everyone so outraged is that Bill C-38 seems to propose changing Canada’s environmental laws for the worse, and the government doesn’t seem to care what Canadian citizens think about that. Below are three of the campaign’s top 10 reasons to speak out against Bill C-38:

Black Out Speak Out campaign leaders also ask that people support the cause on Facebook and Twitter.