HomeUncategorised Your fingerprints could be stolen just by swiping on your smartphone!

Your fingerprints could be stolen just by swiping on your smartphone!

Are cybercriminals getting their dirty paws on your fingerprints? 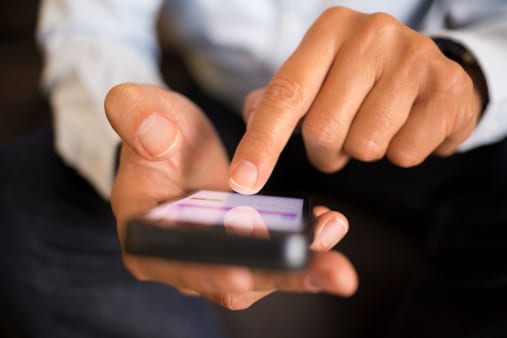 It sounds like a crazy idea, but experts are reporting that a recently discovered flaw on the Galaxy S5 makes it possible.

Now, there’s no need to throw out your phone just yet. The chances of your fingerprints having been stolen are incredibly low – in fact, the researchers who discovered the flaw note that the discovery was the result of lab testing, and they don’t know of any customers actually affected by the result.

But the fact remains that the technology you use every day to conduct business or connect with loved ones could easily be used against you.

With the right malware secreted on your phone, your fingerprints could be stolen every time you swipe on the screen. And it only takes a bit of lab equipment to start using your fingerprints for criminal gain. What would have been a ridiculous plotline on CSI years ago – stealing someone’s fingerprints to break into an account or to frame someone for a crime – is now entirely possible.

So while it’s still unlikely that you are at risk from this newly discovered vulnerability in the Galaxy S5, you can’t afford to take your mobile security for granted. Your fingerprints are only one piece of information that can be used against you. Think of all the other sensitive information on your phone – passwords, banking information, important contacts – and how much damage could be wreaked by someone who gets their hands on it.

Mobile cybercrime is on the rise. In 2014, 1 in 10 surveyed mobile users reported experiencing cybercrime, and the vast majority of data breaches in major businesses were caused by access to company data via an employee’s unprotected mobile device.

Don’t leave your livelihood at risk. The team at {company} are your {city} cybersecurity experts, and we’ll ensure you can use mobile devices without fear of criminals stealing your data – fingerprints or otherwise.

Contact us at {phone} or {email} to ensure you haven’t already been compromised.